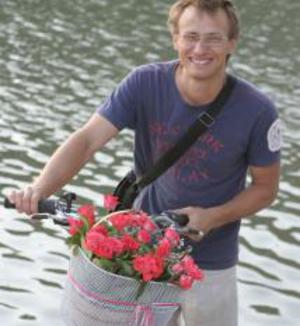 Denis Chernov was born in 1978 in Sambir, Lviv province, Ukraine. He lives and works in Kharkiv after graduating from Kharkiv Art College, in 1998, Kharkiv State Academy of Design and Arts (Chair of Graphic Art), in 2004. He regularly participates in artistic exhibitions (above seventy), both in Ukraine and abroad. Most of Denis Chernov’s artworks are kept in private collections in Ukraine, Russia, Italy, England, Spain, Greece, France, USA, Canada, and Japan. Some works have been sold at "Christie'sHe works in a wide range of graphic and painting techniques, though his favorite is pencil drawing, which covers such as landscape, portrait, nude, genre compositions, book illustration, literary and historic reconstructions and fantasy. In 2004 – 2006 he held a studying workshop at Kharkiv Art College, at present he is a lecturer in drawing at Kharkiv State Academy of Design and Arts. Since 1998, has taken part in numerous research studies and conferences in aesthetics and philosophy, at the same time fruitfully participating in art shows. Since 2006, he is one of the co-founders of an artistic society “INSIGHT”. 2008 - member of All-Ukrainian Union of Artists. Denis Chernov was awarded the medal “Talent and Vocation” by the “Peacemaker” Worldwide Alliance.
International 2008/2009 ARC Salon, the Third Place & Honorable mention - Drawing Category.

Scholastic research luckily combines with his creative work to form a single entity, by which the latter serves as attesting ground of the sorts for his theoretical findings, and the former embraces and systemizes the experience gained through workshop experimentation. The amalgamation of these approaches is of particular significance for an acting artist, which, for example, can be traced, in his work on the graphic cycle “Symbols of Time in Eternity”.Denis Chernov’s favorite artistic medium is graphite pencil or ‘black stone’ as it is literally translated from the Old Turkic. His works, however, are far from what could be described as monochrome. In the potential to convey the impressions of the nature’s visual messages, to render the diversity of materials and textures, and to reflect the nuances or hues of light and shade, his drawings may well compete with oil paintings. The artist’s method, in whose root lies a thorough study of material objects, enables him to address the eternal as well as transient, thus bringing him beyond the limits of the rational. His pencil technique well suits his ability to shift easelly from large-scale vistas to a minute detail or from the untrodden wilderness to the man-tilled landscapes bearing a trace of human presence, thought or even destinies. Pencil, it transpires, makes a perfect tool in the artist’s quest of the paths of the boundless beauty in all its manifestations, be it a lonely tree if not a single branch or a panoramic landscape – all these reflect the artist’s vision of the world as an inseparable entity. In his picture of the world, a smallest object is perceived as an integral part of the omnipresent Macrocosm rather than a thing per se. At the risk of overgeneralization the artist’s motto can be reduced to two words: Infinity and Harmony. As far as his approach to what constitutes an object of art is concerned, he himself put it as follows, “We tend to perceive the beautiful as granted; we have become too much accustomed to the beautiful forms that surround us in our everyday life, so much so that if they were to vanish someday we ourselves would die the same very day”. Yuriy DyatlovArtistic society “INSIGHT”The artistic society “Insight” is a group of artists whose beliefs of creativity are based on the notion of inspired perception. Insight, anticipation, intuitive perception or creative imagination are all parts of a single entity in the process of synthesis of new knowledge, which is derived from reflections on certain evident facts. Insight involves the spontaneous combination of a number of isolated units, which result in new experiences. Insight is a creative idea dawned by Archimedes when he leaped from bath and shouted: “Eureka!” (“I have found it!”). Insight is sometimes bestowed to the artist when something of emotional importance albeit, not definite to consciousness, becomes the content of imagination. Transferring impressions into artistic images is an intrinsic feature of artists who aspire to beauty and whose aim is the perfection of everything. The artists of our society inexhaustibly create new paintings, graphics and sculptural works, which are all stamped with their unique individuality. In fact, insight and intuitive grasping is part and parcel of any creative process. An ingenious person can arrange an astonishing melody simply out of separate phrases and he is also able to create new constellations and worlds by simply gazing at them. The idea of our society has come into the world when we, beholding our pieces of art, all of a sudden decided to unite in order to exhibit our works together.